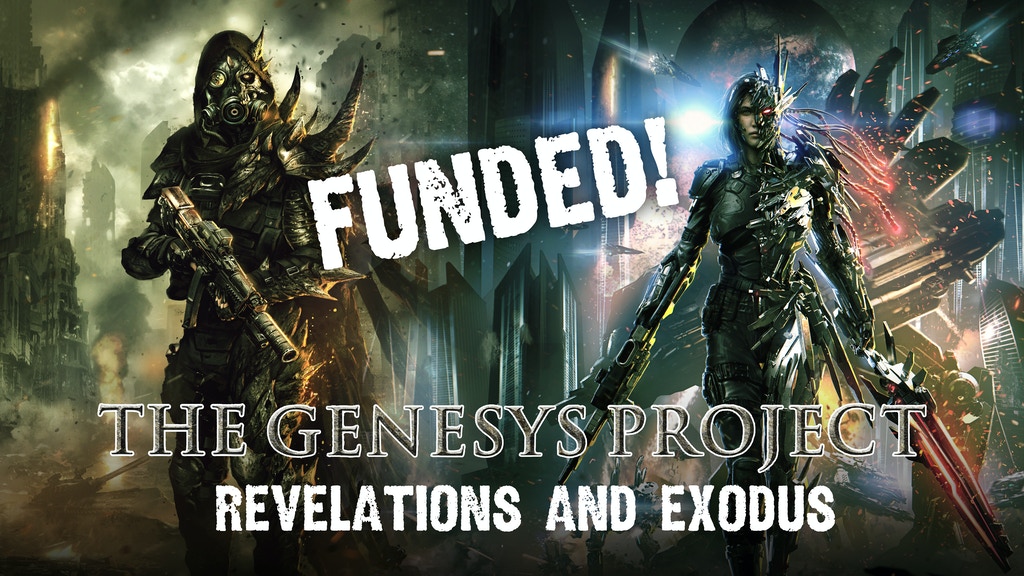 THE GENESYS PROJECT- The Next Age in Tabletop Wargaming

Create your factions in any Age or play a campaign through them all advancing from one age to the next. The Next Age in Tabletop Wargaming brings your three ages of gameplay with one Core Rulebook for all ages. The Genesys Project Core Rules The Birth of Genesys- 1st Age: Fantasy Medieval The Revelations of Genesys- 2nd Age: Modern Apocalyptic The Exodus of Genesys- 3rd Age: Far Distant Future Order now to get Kickstarter pricing through Backerkit Learn More at www.genesysgames.com

Latest Updates from Our Project:

First Stretch Goal is only a short bit away and I wanted to share with you some of the exciting things we will be seeing in Exodus of Genesys The 3rd Age.

Spread the word and lets hit those goals.

As you would expect in a game like this new weapon types, energy weapons, mech walkers, new vehicles and so much more are coming to the 3rd Age. This is but the tip of the Iceberg as many of you with the First Age in hand.

I am going to skip ahead a little and jump right into a Fey preview, and a couple of the new Spheres found in Exodus.

Wars from the previous age have weighed heavily upon the Fey, often blurring the lines of their chosen path and opening up Congruent Spheres. These Spheres of Influence allow classes and/or factions  to literally change their Path during from games using progression. This does not mean they lose previous traits but instead become part of their new path opening up new trait options for them.

Here is an example of new three new Spheres of Influence.

Having a trait in any of these three spheres gives you the option to take traits from the other two.

Preview- Trait from the Sphere of Absolution

Martyrdom X: If any model or models with the ability Martyrdom are removed from the table after being killed, during your next player turn gain X Command Value. If a model killed is a Level 3 class or higher, you may also apply Martyrdom X to Challenging the Initiative in the next game round.

Technology also appears in new ways among the Fey. This technology is focused and powered by the energy of the fey. Particle Lances of various types and shapes form the weapons of the Fey dependent upon the Sphere of Influence they are most focused in. There are Particle Lances of Destruction, Pain, Protection, Justice, and more.

Many Fey as a result of the wars in Revelations no exist in the material world. They are the Outcasts. This gives them unique access to new traits abilities found in other domains. In this way you can get access to Classes from other Domains even taking new Vehicle or Monster Classes.


We will be talking about the other Domains in the 3rd Age over the next few days.

We are now funded! A huge thank you to everyone supporting us this far in!

We are half way through the campaign and now the real fun starts! We are going to be revealing some additional stretch goals which will be a ton of fun. Im certain everyone likes getting additional content, so that is where we will start! Stretch goals will include some for everyone, Epoch, Eternity, and Infinite Pledge Levels.


Expect to hear more from us shortly!

We are getting close to funding being around 10% to go! Help spread the word and look forward to us jumping through to the stretch goals! I know with just a little bit of a push we will be breaking the mark needed to reach our goals.

We are currently doing rounds of Podcasts to spread the word and will be talking more on those (with links) as some of them go live.

We have a new gameplay demo that just went live on our Youtube page. There were some camera issues and it does get a little fuzzy, but it will give you a good idea of how to work with with player turns, activations, the Combat Situation, Reactionary Activations, and more. Both of these armies are the same we used recently in a playtesting session to work with Tanks, APC Transports, Cannons, and Automatic Weapons. So there was not a lot of melee squads, powers, flyers, or other types of factions in this mix.

The End Game: A normal game lasts to 6 Game Rounds. However if you are in position to get your objective and just thinking I need one more round and I could get it, you may attempt to take the game into the "End Game". You must roll your highest surviving Command Characteristic + d6 to equal or beat the game round you are wishing to go into.


THE BIEST DOMAIN IN REVELATIONS OF GENESYS: THE 2ND AGE

The biests are divided into Kingdoms and have Regional Traits. These are expanded upon in the 2nd Age, but where the Biests excel at is in the wide variety of options they have in future ages.

As they are in the 1st Age, no one gets physical characteristic increases the way Biests do.  This translates to level 2 and 3 Classes being very tough to deal with. While they are geared towards taking hits and delivering them in melee combat, they are also amazing infiltrators, with flyers and tunnellers all in the mix.

Biests get a solid array of vehicles and introduce some new specialties into the mix when it comes to throwing some armored plates, spikes, a battering ram, and even loading their vehicles out with as many weapons as possible. Biests bring a new flavor to their own Vehicle Classes, but have a lack of Military Tanks. If you like ramming into your opponent, jumping out and hacking them all to bits....... the Biests are right up your alley.

While Biests can make their whole domain into monsters, Biests in the 2nd Age get a series of Classes that are dedicated to Monsters. These monsters will take on the tanks of humanoids, rip apart the masses of soldiers before them.

The Weapons of the Biests

While Biests can specialize in natural weaponry, they also have a their over version of modern firearms, machine guns and cannons. Melee Weapons are also a specialty with greater access to customization than ever before to do additional damage to kill your opponents face to face.


The Biest playtesters are among the most rowdy of the bunch and I think that has to do with their overly aggressive playstyle (both the Biest Domain and the Players).